This time I’ll talk about more complex things, which give developers more power over their life. Actually, they just look complex. In fact these are quite natural operations over Git commit history structure, which was described already in my previous posts and gazillions of posts by other people.

So, let’s start with the simplest. Mr. Cleverhead sometimes fails to remember which branch he is currently on. He commits to a branch master, while in fact he should have committed that to staging. What can he do to fix it? He decides to run git show, save the commit as a patch, then checkout branch staging, apply patch there and commit with the same commit message. Well, it happens so that Git already has a command that does exactly this automatically! It is called git cherry-pick. Besides fixing Mr. Cleverhead’s reputation, it is also quite often used for example to backport commits to release branches. 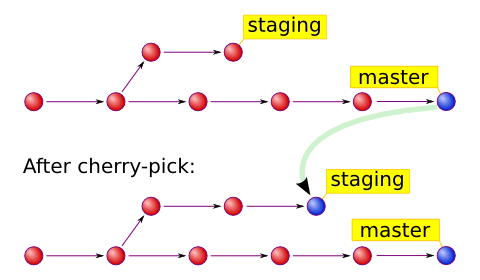 Note, however, that this still requires Mr. Cleverhead to remove his commit from master. We believe in him.

The next big complex thing is a branch-wise cherry-pick. This is called a rebase and often casts a great deal of confusion upon novice Git users. But actually rebase is to cherry-pick as is multiplication to addition: by doing rebase you just cherry-pick a series of commits on another branch. Although git-rebase manual page is ugly and unfriendly, it tells the same basic thing: rebase is a series of cherry-picks, followed by a branch reset. 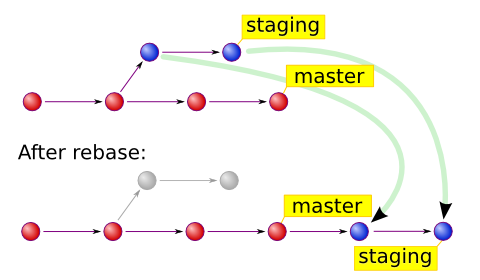 Note the desaturated old commits. Despite Git changed the branch head, it didn’t remove these old commits. They are still accessible through reflog, or by their SHA1 ids, in case you realise you’ve made a mistake.

There are many use-cases for git rebase, from Mr. Cleverhead committing several commits in a row to a wrong branch, to complex integration and release cycle management workflows. See, for example, http://nvie.com/git-model .

There is also an interactive mode for git rebase. And it is truly awesome! It allows you to edit your branch in any way you want: remove commits, edit commits, squash commits, even change commit order. So try it out. Now.

The post would be incomplete if I didn’t mention git filter-branch. It is basically the same as rebase, but it usually affects the whole branch up to the initial commit and for every commit Git performs a certain action. It is very complex and powerful tool that is quite rarely needed and quite more rarely used. Its uses include: removing a file from the whole project history (for example because of license issues, or because Mr. Cleverhead accidentally added his grandmother’s recipe book five years ago); fixing author’s name in commit messages; creating a separate Git repository from a subdirectory. All this comes free with Git and doesn’t require you to spend weeks doing this any other clumsy way.

Last thing I would like to mention today is pull-rebasing. This refers to the following problem: by default git pull means git fetch followed by git merge, which is perfectly fine if you haven’t committed anything locally. But if you have, this creates a merge commit. This is perfectly fine either. But if you do small commits often, or work on a big feature in your branch and merge master often to be in sync with updates, this will create a so-called “loopy history”, which usually pisses people off. Especially Linus. So if you have committed a small fix that you can’t push because Mrs. Slowrunner managed to push a commit before you, use git pull --rebase. This will rebase your work upon Mrs. Slowrunner’s work and no merge commit will be created. If you work on a topic branch and would like to sync it with master, simply run git rebase master. This will reduce pissed off people count too. 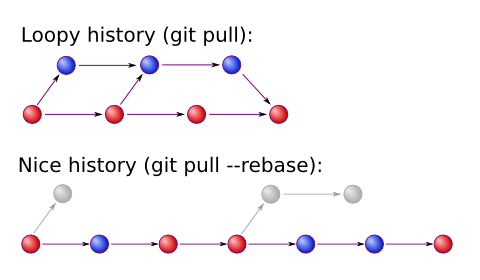 Note, however, that rebase rewrites history! This means, that if you have published your work somewhere, you shouldn’t rebase it, unless you have warned people that they may expect history rewriting. This is usually refered to as throw-away branches (for example branch pu of git.git). If you have published your work, rewritten it and try to publish it again, git push won’t let you. If you force it to, expect angry people to come to your house with your local analogue of baseball bats.

Regarding angry people: some workflows require topic branches to be squashed to a single commit before merging to mainline. This is easy in Git: just use the --squash option of git merge, and everyone will be happy. If you want to squash only some of them (for example, make 5 commits out of 20), you can use aforementioned interactive rebase.

This pretty much concludes this series of Git posts. If you feel that I have left something unveiled, please tell me that! I appreciate all the comments.